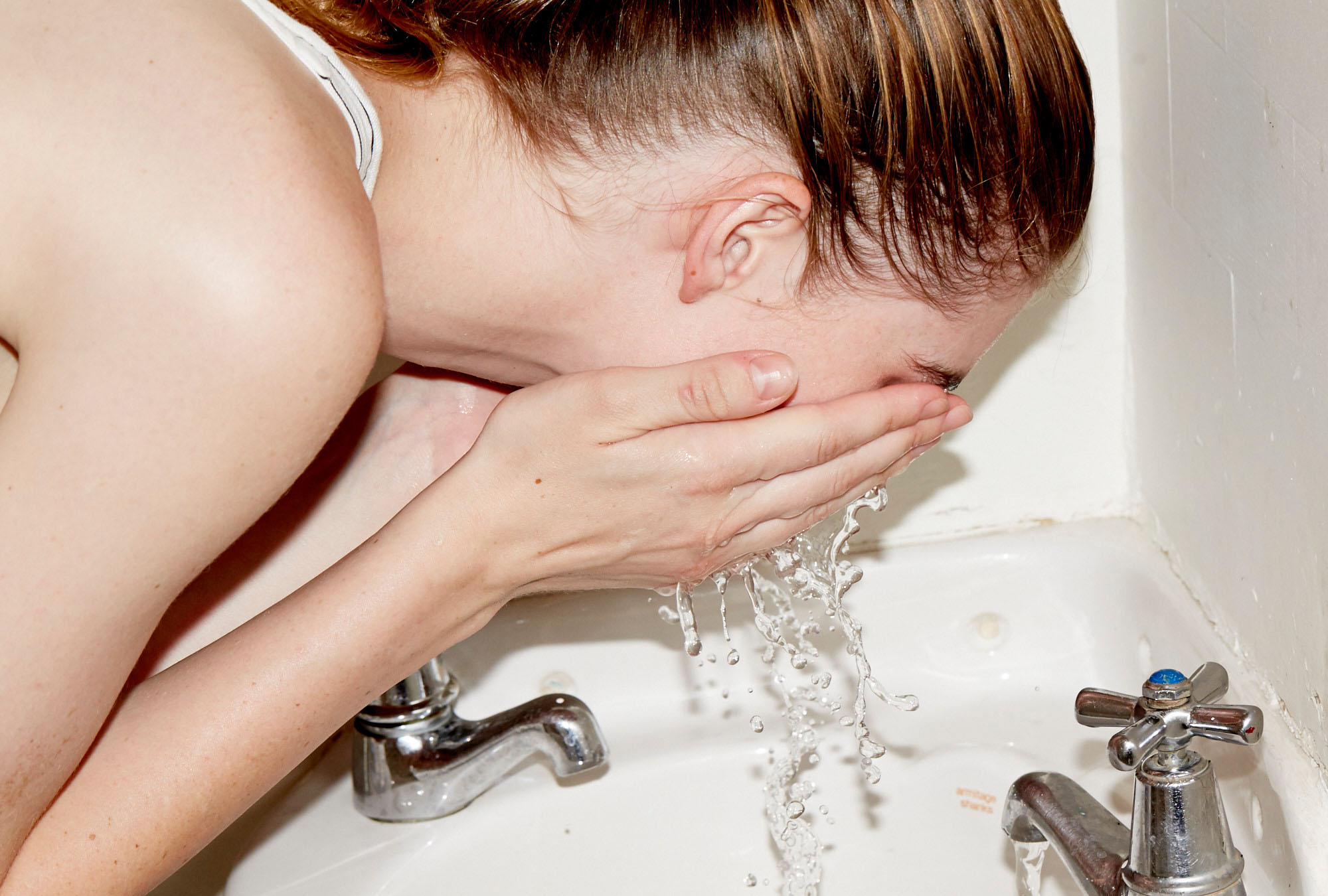 A Comprehensive Guide To Dealing With Hangover Skin

It’s probably uncouth to admit this – especially on a beauty website – but I’ve come to accept that hangovers are just a part of life, much like taxes and death. Full disclosure: I’m mildly hungover as I type this, thanks to the très incroyable exhibition that Par Femme threw last night (thanks, guys!). I had three glasses of rosé. I’ll live.

Celebrating the closure of another week by splitting a bottle of vino rosso with your best mates – a practice commonly referred to as #TGIF drinks – is the best. The woes of the week fade into obscurity, as you pour yourself another glass and settle into the stool at your favourite bar.

But do you know what’s not the best? The aftermath.

Maybe you’ve been lulled out of sleep by a raging case of the Hangover Horrors, be that waking up to the irrational, colourful, typo-laden text you fired off to your ex at 2am, or recalling a (mostly one-sided) deep and (questionably) meaningful conversation you had with a (probably unwilling) stranger.

Maybe you decided to cancel yet another breakfast with your mum, just so you could shuffle down the road to your favourite karaoke bar, ~guilt-free~, to give the world another terrible rendition of Mariah Carey’s “We Belong Together”. Maybe just watching Parks And Recreation on your laptop is enough to make the world feel like it’s about to spin right out of control, like a fidget spinner in the hands of an amateur*. Maybe your eyeballs feel like they’re bleeding crimson tears. Maybe the gentle whiff of bacon emanating from the kitchen of whatever cafe you’ve perched yourself at for the morning is enough to make you want to hurl. Maybe you’re actually having one of those deliriously fun hangovers, where you and your fellow sloth-esque friends have woken with the quick wit and genius humour of all the great comedians that have come before you.

No matter the breed of hangover you’re greeted with on a Saturday morning, there’s one constant – and that’s the flailing state of your dry, parched skin. Each time I’m faced with my reflection on a hungover morning, I am flummoxed as to how the sassy, carefree gal from last night has wound up to become this crumpled, puffy, husk of a human. Will I ever learn? Hopefully.

Since I’m probably not going to stop rinsing my liver with rosé anytime soon, I reached out to two skin experts – Emma Hobson, the Education Manager for the International Dermal Institute and Dermalogica, and Chiza Westcarr of All Saints Clinic – to see how to best care for hangover skin. Compromise! Read on for my findings, tips, and tricks on how to bring your skin back to life, even when you have seemingly done your best to murder it the night before…

First up, I badgered Emma about what alcohol and sleep deprivation actually does to your skin. Until now, I’ve relied heavily upon common sense to determine how bad drinking is for my skin. Alcohol + no sleep = me looking like Charlize Theron in Monster. Emma reassures me that the “odd indulgent session will not have a long-term negative impact on your skin, as our bodies recover quite well.” Thank you, trusty vessel! It’s when you’re continually indulging that the effects can easily be seen on the skin, manifesting themselves in your face by way of “dehydration, redness, and inflammation.” Alcohol will “aggravate rosacea and deplete the essential vitamins and minerals the skin needs to function well.” But what about when you’re going full-throttle long-term? “Long-term alcohol consumption will lead to signs of premature ageing.” It’s not new information, but it’s a good reminder that the way we treat our body now is going to impact how we look later on in life. A fact I love to ignore.

In regards to the correlation between increased redness and alcohol, Chiza tells me that alcohol is a vasodilator, which basically means that it “causes capillaries – or blood vessels – to open, and when they open, they have that rush of blood come through.” It’s less a reflection of the liver, as I had assumed, but more that the “stimulation causes your blood vessels to open, and blood rushes out into that space, and that’s what causes redness.” Science!

Another fun addition to a night out is the amount of sleep you lose. According to Emma, sleep deprivation causes “untold stress on the skin.” Sheesh! Furthermore, “prolonged stress release hormones – mainly adrenaline and testosterone – have a stimulating effect on our oil glands (mainly the sebaceous gland), resulting in increased oily skin and breakouts. Stress can also affect the body’s circulatory system, causing redness and skin sensitivity. And to top it off, stress over a prolonged period of time, causing sleepless nights, can also be a factor when identifying hyperpigmentation on the skin. Skin that is ‘tired’ can appear dull, and lacks that ‘healthy glow’.” *Vows to start prioritising beauty sleep*.

Outside of drinking in moderation, Emma suggests going for a clear spirit – a vodka or tequila, say. On top of trading in your shiraz for a vodka lime and soda, she advises that you “consume and apply lots of antioxidants to your skin, and use products that contain anti-inflammatories to control redness.” Drinking water is key in feeling less hungdog millionaire – a big old slug of H20 before you drink, while you’re drinking, and before you go to bed. To counteract all the sleep you’ve lost, and will regretfully never get back, she suggests using “skin regenerating serums and oils, inflammatories to control the redness, and oil and spot-control treatment products if you’re suffering from increased breakouts.”

The next chapter of my convo with the two skin experts was like watching an episode of Mythbusters that leaves you feeling legitimately shook. Both ladies big-upped drinking water for overall health, probably quietly laughing to themselves at the naivety of a fully-fledged woman asking how many litres of water she should be drinking per day. Chiza straight up told me that while drinking water is “great for detoxifying, for flushing out, and for allowing the repair process to happen in the body,” it “doesn’t actually have any impact on your skin.” A lifelong myth I’d subscribed to was suddenly debunked in eight words. Shook! Chiza says it’s the “biggest fallacy,” and that the “last place water actually gets to is your skin.” It actually makes sense, considering water first goes through the intestines, gets absorbed into your bloodstream, and is filtered by kidneys. Then it hydrates cells. She instead recommends adding humectants into your home care regime, which “attract and lock moisture into your skin, and helps it glow.”

Furthermore, Emma suggests drinking 2-3 litres of water each day to aid with body hydration, but again says it doesn’t correlate directly to having hydrated skin. Instead, she said it’s more effective to apply products that “provide an instant boost of moisture, [and] one of the best ingredients to do this is hyaluronic acid, which can hold 1,000 times its own weight in moisture.”

And what happens if you’ve committed the cardinal skincare sin of wearing make-up to bed? Nothing good! Sleeping with a full face of make-up doesn’t only cause “skin dullness and congestion, but can be the cause of eye irritations and infections,” according to Emma. Ay, caramba! If you’ve had a big one and neglected to do the very basic task of removing your make-up (hey, it happens), Emma suggests doing a double cleanse, starting with “an effective cleansing oil for a deep down clean.” Dermalogica’s PreCleanse is our pick; it’s the perf rescue from clogged pores and dried-up mascara. How? “Since like attracts like, the oil-based lotion attracts all the dirt and skin oils, and they miraculously dissolve even the toughest, dried-in, waterproof mascara, leaving the skin squeaky clean.” Sign me up, buttercup. After you’ve given your skin a thorough scrub, Emma suggests applying a hydrating gel mask – “it feels great if it’s been in the fridge to cool” – and leaving it on for at least 10 minutes, “followed by a hydrating booster and soothing hydrating mist with a lightweight moisturiser.”

She’s on the money. After an especially fun night out recently (involving an especially foolish line-up of cocktails that I was definitely not in a financial position to buy), I woke to one of those special, crippling hangovers that transcend just the physical, and instead rip into your emotional, financial, and mental states. I crawled into the bathroom, slumped my limp, tired body into the tub, and like Gollum reaching for the precious, slapped Kiehl’s Calendula & Aloe Sooth Hydrating Masque all over my still-drunk skin. I didn’t have the foresight to put that bad boy on ice before applying it, as Emma suggested, but it was still one of the most tranquil experiences of my life. Kiehl’s, you champ. When it comes to hydrating mists, I’m still not sure which is my favourite out of La Mer’s The Mist and Dermalogica’s UltraCalming Mist. La Mer’s is obviously plush AF, and feels like heaven to touch, but Dermalogica’s UltraCalming Mist is the product equivalent of that mate who always pulls you out of the throes of an alcohol-induced melt, with their gentle lies about how you weren’t that embarrassing the night before. Bless.

The next time you pre-empt being hungover, arm yourself with the following tools: a hydrating spritz toner, a hydrating gel mask, a hydrating serum, a protective replenishing oil, and a moisture-rich protective moisturiser. Drink some water to give your body a rest, but don’t drop the ball when it comes to applying topical moisture. Make a smoothie. Don’t check your sent messages if you’ve got a bad feeling, watch a guilt-free episode of Sex And The City, and call up friends that you know will make you lol.

*Am I the only one who feels like Principal Skinner does about the fidget spinner? Surely the children are wrong on this one.