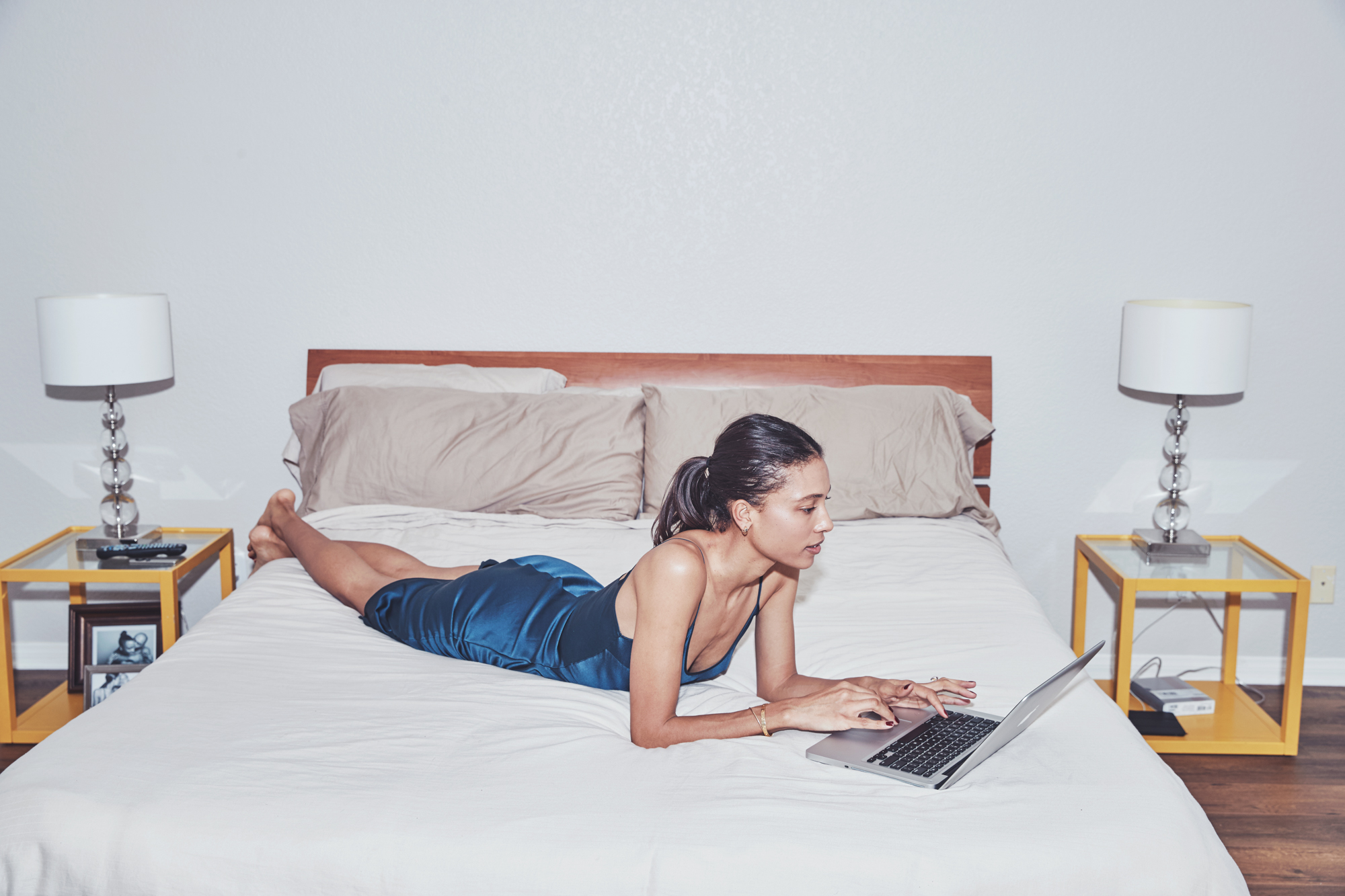 How 13 Women Landed Their Dream Jobs

We all love a good success story. A story of a woman interning, surviving on a few measly dollars, cursing her unlucky stars for not having been born a trust fund baby in New York while stitched to the hem of a terse, yet masterful editor. Am I recounting the premise to The Devil Wears Prada, one of the most over-quoted fashion films of all time? Perhaps.

Anyway, now that I’ve flourished my story hook, the point I am really trying to illustrate here is that there is something particularly satisfying (soothing, even) about learning of the career trajectories of women we have perceived to have “made it” …a kind of vocational voyeurism, if you will. And what is making it, anyway? Is it working hard throughout your 20s as Kelly in HR with magnificent people skills, only to find out that what you really want to do is go to Hollywood and become the next Cate Blanchett? Is it a linear path of study, internships and promotions that all gets you to a final resting place? Or is it perhaps a messy shamble of self-hyphenated titles displayed on your Instagram bio – DJ-Model-Astrophysicist, Designer-Creative-CEO – that really says, “Hey world, I am here and ready to w-e-r-k it”??

Here at THE FILE, we’ve interviewed our lion’s share of talented women from all walks of life and of all ages. We’ve learned a lot from every single one of them. About what it means to juggle a high-flying job with new motherhood and a husband. About working your whole life as one thing, only to find it all take an entirely new direction. About what it means to slow down and master the ever elusive dance between work and play, or conversely, to be called into action by the kind of universal angst that forces us to question who we are and what we’re really meant to be doing.

It’s all here. If you want to be inspired, please read on. There are many pearls of wisdom to be had, many future wins to be plotted – so fire up your Linked in profile, flip open your leatherbound diary, and get ready to take note!

“I was a stylist for most of my life. It never occurred to me to have a different career. I’m not a businesswoman. I don’t like business particularly. I’ve said this many times, it’s just, I never had to plan in my life about anything. I never said, “I’m going to go to college. I’m going to get married. I’m going to have three kids. I’m going to be … ” I never had a road map for anything. Everything just happened the way it happened and I always believed that one step informs the next. If you try to plan something it probably won’t work out”.

“I started out as Eva Chen’s assistant at Teen Vogue, and from there went to work at Glamour, Lucky, then I moved abroad for a year to Cape Town and then London, before coming back and ultimately joining Coveteurand InStyle. I’ve worked really hard at every job, and worked really hard to get each new job, but I’ve tried to keep an open mind about my whole path and not get too stuck on any one thing.”

“I always knew I was going to have my own business someday. I was raised by a working mom, who was such a great role model and taught me to be an independent and self-reliant woman. When she passed away I decided that life’s too short to do something you are not passionate about. So I just did it. I quit my job and founded the company. I didn’t really think about the consequences and in retrospect, I may have been a little naive. But my decision turned out to be just right. Just do it. I believe overthinking things can destroy any business plan. The motto ‘no risk, no fun’ will help you in getting started.”

“I studied journalism and communication for seven years after graduating high school while doing various internships in French magazines such as ELLE, Grazia, and GQ. After that, I started working as a freelance writer, and then got a job at a high-end magazine as their Social Editor. I’ve always been into social media and everything, so when it sort of took off last summer I decided to quit my job to pursue this path, while writing for some of my favorite publications as a columnist.”

“I hit a point, it was when I turned 30 and I had a realisation that my 20s had passed and I couldn’t fuck around anymore. I really need to take a stand and be brave. It’s hard to make changes when you’re so used to running on autopilot with something that’s working for you. You’re doing well, but you realise something is missing. “I almost had that feeling that I needed to go back to school, to learn something, start studying and get busy with other things. Feed my mind. It was really a point where I was like, ‘What it is that you want to do, Jess? Because you’ve had everyone telling you what to do in your 20s, and a lot of outside influences at play. I just wanted to be like, ‘Okay, that’s all the things that make up my current career, but what is it that I really want to do?’ And that’s when I knew I wanted to start my own business, and I wanted to discover the beauty world and get into film again, because that what I started doing when I was ten or twelve years old.”

“Luke and I met at college, and we started doing our school assignments together. We talked about ideas, we were just into the same sort of things. We started making costumes for musicians like Karen O from the Yeah Yeah Yeahs when she first came to Australia. Since I’ve met Luke, when we’ve worked together, it has really been electric. The energy of it has had momentum. It was way more exciting than what we were doing at school. So we entered a competition together,  then we got selected, and we never thought that would happen. It gave us the confidence to work together and make it a thing.”

“I was itching to use my skills and crafts I had worked hard at. I always loved making clothes and getting dressed, and when I went to college I met a professor who saw my talent and told me to think about lingerie. She told me how important starting on the inside (whether finding yourself or getting dressed) was, and after some corsetry classes and years of just making stuff, and not having my own brand, I decided to take a break from modeling and get my brainchild off the ground.”

“I studied fashion and textile design and was on exchange in Paris for fashion week. I was working on a show and was called away to drop some samples to a stylist. It was the first time I had been ‘on set’ and I loved everything about it. I came home to Australia, began assisting, and interned at Vogue Australia, and one thing led to another. [My] favourite shoot is really hard! I’ve recently been collaborating with a lot of artists, including Caroline Denervaud and Maurits Sillem; I find this work really interesting. Last year I went to Senegal with M.I.A., that was really cool.”

“I started my modeling career in Paris and within 6 months I went to live in Australia, Japan and traveled all over Europe. Modeling was my ticket to freedom and I am so grateful for all the places I could visit and wonderful people I meet through this job. The biggest challenge for me was how rapidly I had to learn to become independent, self-sufficient and alone. Being away from friends, family and my beloved everyday routines proved to be the biggest obstacles for me.”

“Paris Georgia was a natural progression between two best friends following a dream; we still can’t believe it when we call ourselves fashion designers. It’s strange and it seems so foreign to me – perhaps it’s because I saw myself as a stylist first. I think things became very real with Paris Georgia when we signed with our showroom, Maryam Nassir Zadeh, in New York and got our first wholesale orders. At that moment, we realised people believed in what we were doing and wanted to support it. They were really relying on us to deliver and it became very real, very fast.

“In an industry that’s dominated by youth and that loves youth, my early experience at US Vogue taught me that a certain level of experience can only come with age. The office was filled with hard-working women in their 50’s and 60’s in the most respected roles; they’ve been in the industry the longest and that’s the way things should be. We should all be learning from them.”

“I’ve always drawn. My parents made sure to involve both my sister and me in the arts from an early age. Growing up, it was a hobby for me—not something I wanted to pursue as a career. Sometime during my senior year in high school, this changed, and I went to the School of the Art Institute of Chicago for painting. After about a semester, I realized I was a pretty bad painter. I switched to Fashion Design. I transferred to Parsons after my sophomore year and finished out there. I worked as a fashion designer for seven years at J.Crew, illustrating on the side for fun and for friends. I posted drawings I was making on Instagram very casually. It slowly grew a following and I began picking up more work. Eventually, it just became clear to me that I was enjoying illustrating more than designing. I left my design job in May and have been working as an illustrator full-time since.”

“The beautiful thing about living in New York is that it’s the epicenter of so many different industries, in addition to cultures and races. So, if you have a curiosity about something, you can pursue it. For me, that meant lots of different internships. While I was in college at NYU, I interned for Ralph Lauren and Def Jam Records, and ultimately went down the music route. However, once I became an attorney, I was able to bring these two worlds together in my legal practice. Today, I am an entertainment attorney, representing artists, brands, and creatives, and I specialize in two areas that I’m very passionate about: fashion and music.”

“I was a stylist right out of college for a few years, then was recruited to go in-house at the label Reformation, was there for 6 years. I then started a men’s label with an ex, we broke up during and I left it with him. While doing the men’s label I started consulting for other brands and working with my agent POOL which let me pursue all the things I am interested in. The whole time since I was 20 I have been in bands and making music. I have been painting since I was a small person and then a year ago decided to make serious steps to doing something with that and have put together three exhibitions.”