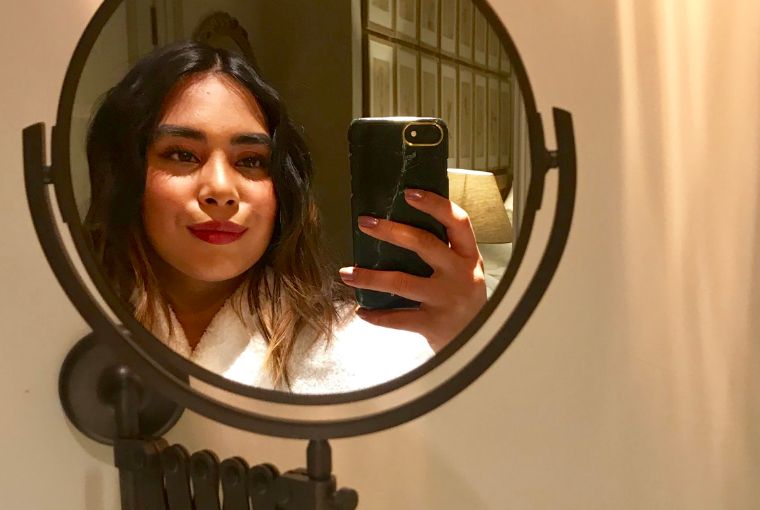 Refusing to Contour is a Refusal to Mask My Asian-ness

Traditional South Asian beauty routines are works of art. The painting of the face, the heavy set kohled eye makeup with colour washed across the lids, blush brushed skyward and always a red lip. South Asian beauty is rarely minimal. It’s poised, it’s detailed, it cares about appearances: it’s a reflection of the culture and its rich history as much as makeup around the world is.

Growing up in the late Nineties to early Noughties in the UK where tiger-bleached blonde stripey hair was in and tough eyebrows were stripped away to naught, where makeup knowledge has become common knowledge thanks in large part to Instagram and Pinterest – you don’t need to be an artist to have some kind of understanding of contouring, strobing and highlighting. However, for the longest time, it has felt as though makeup trends like contouring, though effective, have not been appreciative of my rounder features. Which is probably why I do not do it: I refuse to tone down my Asian-ness.

Before Max Factor coined the term ‘contouring’ in the 1940s, defining it as a way to make faces less flat with given dimension – even before drag queens and the Kardashian’s introduced the heavy-handed version of the technique to the rest of the world  – the ‘silent hand’ of colonialism has meant that almost everywhere you go, Eurocentric features are desired, if not preferred.

As a result, we have as a society whittled down that which is ‘good’  into a range of features that are not naturally taut, high or sharp, to be shaped in a way that only fits into one beauty standard. Rounder cheeks are to be “cut” to the gods, darling, noses to look smaller while simultaneously widening eyes with a cut crease. Faces are to be made generally more European in shape. Worse off, it’s made a lot of women of colour feel that, by achieving this look, they will become prettier or ‘better’. It’s similar to Snapchat or Instagram filters – they’re cute, but why are they making me look more white to appear more attractive?

Though we are coming out of the 2015 era of heavy contouring and more people are reverting back to a more natural look, the problem with the trend (that will not quit) is that it can arguably do the opposite of what makeup is supposed to do: accentuate your features instead of masking them.

A personal belief of mine is that makeup should be fun, an extension of your personality yet a combination of your mood that day. Becoming comfortable with a look which changes how your features look so much so, that without any makeup on you don’t feel as good, can be a problem because our skin and body really is the only home we’re always going to live in. While in the same breath, I understand why many women of colour contour: because there is a hierarchy of beauty across the world, sometimes it is beneficial to some to look less like their ethnicity. And of course, not every woman who contours harbours a some conflicting internalised hatred.

As much as I love a bronzed look (I’m on my fifth Bodyshop Shimmer Waves in 01) and just discovered NYX Matte Bronzer in Deep Tan, as I experiment with makeup more, I’m more excited to get to know my face as it is and to present that to society, instead of features that feed into this beauty hierarchy. It’s bigger than my personal relationship with makeup and beauty trends in general. It’s a political act to be exactly who I am when it’s not the ‘ideal’. *Insert several selfies of my deep honey skin during golden hour*.