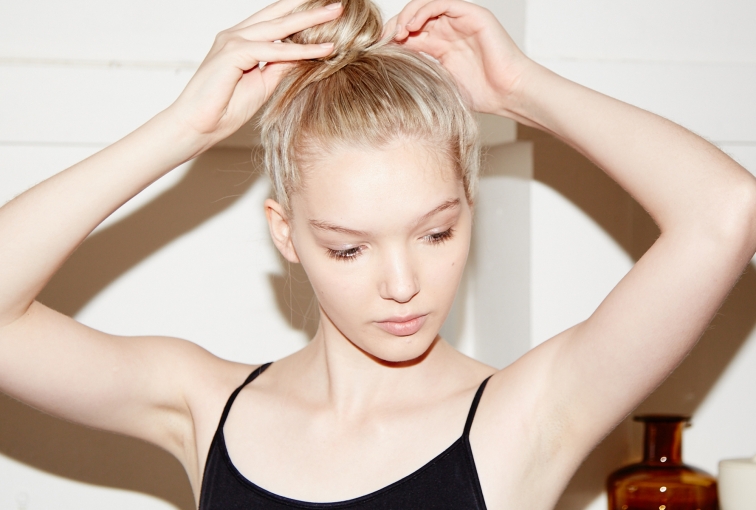 I Said Goodbye To Peroxide After A Decade

What have you guys been doing for the past six months? Personally, I’ve spent them watching my scalp-bleached hair turn from a shimmery, crowning glory that warranted contemporary comparisons to Daenerys Targaryen, to what I imagine a barrel of hay would look like if you slung mud right down its middle. The most apt feedback on my hair’s demise came from our founder’s four-year-old daughter, who once described me as “the lady with black and white hair.” Kids can be so honest. As is my modus operandi, I decided the best course of action to take would be to do nothing at all.

Despite its ghastly appearance, I could have insured my hair for thousands. Over the past decade, I’ve dropped a flipload of cash I don’t have chasing the Scandinavian dream. The masochist in me just decided to crunch the numbers, taking into account inflation, the differing cost of dye jobs between my hometown and Sydney, and the frequency at which I had it dyed. The grand total is around the THIRTEEN THOUSAND DOLLAR mark, meaning I’ve paid close to the cost of a small car to live in a near-perpetual state of regrowth. Sorry guys, I just passed out in my chair. Back now! Hi!

The decision to finally grow out my scalp-bleach arose from a variety of factors. I don’t particularly enjoy sitting in a hairdresser’s chair for five hours, fighting the course of nature for vanity’s sake. You can see above for the crippling effect it’s had on my bank account, which doesn’t even take into consideration the money I’ve spent on blonde shampoo and conditioners, leave-in treatments, and truckloads of Olaplex. I may as well have just shaved my head and stapled bits of straw to my bald skull, because that’s exactly what my hair looked and felt like at the conclusion of my ten-year investment. Most dangerously, it fed my delusional tendencies — in my mind, I looked like Serena Van Der Woodsen, but almost every photo of me from the past 3,650 days tells a different tale.

We’ve had some good times, my hair and I. My wardrobe comprises of 80% colour, but you’d never guess, because I wear black-on-black-on-black most days of the week, and white hair is da perf accessory for a black-on-black-on-black lewk. Red lipstick and white hair? Muy bueno. Outside of buying new stationery, nothing satisfies more than heading into the ‘dresser feeling like a swamp donkey, and reemerging an illuminated goddess. My first attempt at growing out peroxide fell right before the Great Balayage Trend Of 2012, meaning that, thanks to my hair, I was accidentally ahead of the curve. Laziness prevails!

Sometimes if you love something, you have to let it go. And the best way to say goodbye to scraps of blonde is with the aid of a professional. My expert of choice was Monique McMahon, colour director/owner of the glorious Que Colour, and the exception to my above rule about not wanting to spend five hours in the hairdresser’s chair. According to Mon, people generally seek #help growing out their peroxide about two or three months after their last dye, because the “more natural, virgin hair we have to work with, the better the result.” Two months, six months — who’s counting, really?

The technique is referred to by the lovely Que team as “making the move,” which basically means taking someone from a very heavy, solid colour into a more natural and freestyle shade. Mon says it’s a “great way to make the hair look more natural, and to have a nice, healthy grow-out line, rather than a solid one.” We started the six-hour process with a pre-colour toner, which Mon applied all over my hair (that already had a heavy saturation of colour on it), which “really evens out your [hair’s] canvas, and helps to get a more even result in the end colour.” The pre-colour toner stayed on for fifteen minutes before I made my way over to the basin to wash it out, resulting in an intentional but “really ugly colour” (Mon’s words). I knew my hair must have been a scary sight to behold, because on three different occasions — at the basin, and twice on my way back to the chair — Que’s lovely team gently reminded me that what I was about to see was definitely not the finished product. The word “mustard” was thrown around a few times, but in my have-been-blonde-forever mind, the colour of my new hair was darker than even the darkest black (Anish Kapoor’s trademarked black, that is).

Next up was the process of reintroducing colour to my blank canvas, with the idea of reaching a colour close to my natural hair colour, only much, much better. Mon then went through my hair and did some face-framing babylights, before scattering some baby light foils throughout the rest of my hair. In between that, she combined a highlight/lowlight (commonly referred to as multi-shading freehand) on the lengths and ends to break up the solid regrowth line, and to ensure the ends stayed light. She rounded it out with a colour shine treatment and a cleansing mask with lemon to hold the shine and keep it delightfully hydrated.

I nearly cried. And not the mortified kind of cry we’ve all had to fight back in the hairdresser’s chair at least once in our lives. You know, when, despite giving them an #inspo picture of Alexander Spencer to work with, they do their best to ensure you look like Nickelback’s lead singer, Chad Kroeger’s, long lost twin. These were the happy kind of tears. I felt free and liberated and clean. Clean seems like a weird aesthetic to aspire to, but I’ve always lived in secret envy of people who always look like they’ve showered, removed every inch of rogue hair off their body, meticulously applied heat to their hair, ironed their clothes, flossed their teeth, matched their freshly-manicured nails to their current season designer handbag, and somehow managed not to spill half their coffee on their crisp, white blouse as they’ve rushed out the door of a morning, jacket slung effortlessly over their shoulders. In other words, the classic fashion PR vibe. Thanks to my fresh ‘do, I was now one step closer to achieving this lük.

If you’re thinking of also making the move, I followed up my trip to the salon with a few ~hard hitting~ questions for Mon, to help you achieve all your new hair #goals. Here goes!