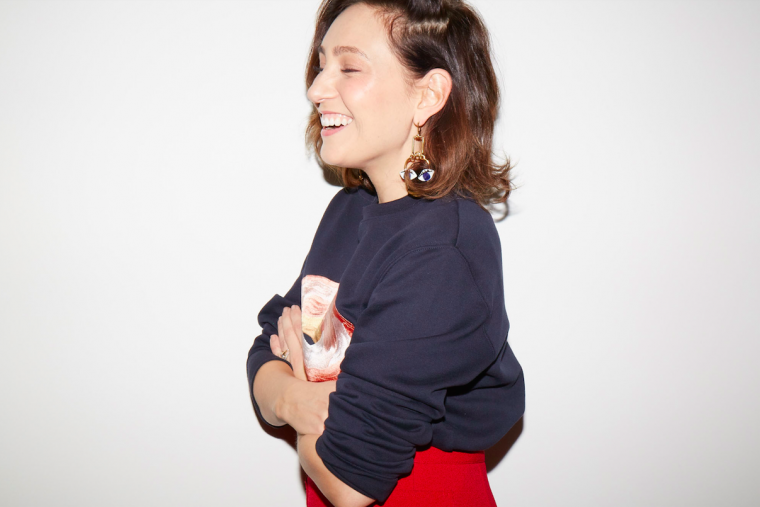 Why Work-Sleep-Life Balance Is Bullshit, According To Zoë Foster Blake

When I look back on my life so far, there are very few moments I remember vividly. My recollection of things like high school teachers names, what my friends did or didn’t say, who dated who, what music I was listening to in the 9th grade etc is almost non-existent. Reminiscing has never been a strong point – I just don’t hold on to things.

The moments I do remember are always marked by a feeling, or an emotion, rather than how a situation physically played out. Many of my memories have served as a marker in time, a moment that has defined me as a woman or that has helped shaped who I am today.

One such memory is when I first met Zoë Foster, who I lovingly call Pops (no surprises here, but I can’t remember why). We were young, ambitious and connected in a way that felt lifetimes old. I remember it so vividly, sitting in a little Italian cafe in Sydney, we had caught up to discuss tech; she was a journalist and I worked in communications and together we were making BlackBerry’s (remember those?) sexy for women. Get emails and internet on your phone! ~ Groundbreaking times ~.

Our conversation quickly turned personal and we began talking about The Secret – a book Zoë had recently read that applauded manifestation and the law of attraction as the secret to life. I read it shortly after and quickly became a believer in its spiritual ways – we had cracked it! Life felt full of possibility. I remember the feeling very clearly, an almost adrenaline-fuelled excitement about what the future could hold.

Since that meeting, we’ve been through – and survived – many things together; shitty break-ups, international travels, countless ups and downs and more big nights than I’d like to admit when Zoë would lovingly take me home and tuck me into bed after one too many shots of what was it, Pops? Jägerbombs? What were we thinking? And now, launching our own businesses and having children.

Well over a decade on, although my views on manifestation, energy and the purpose of life have shifted greatly since that first conversation, that moment we met serves as a big marker for me in more ways than one. Although The Secret no longer holds a place in my life, Zoë Foster Blake always will. Her sensitivity, gentle nature and ability to feel deeply are qualities that I cherish. And now, as a mother, her children are lucky enough to see those qualities reflected daily.

So in the name of sleep week, we wanted to ask Zoë (Entrepreneur, Founder of Go-To, Author, Columnist, mother and all round rad human being) a few questions about how being a mother has impacted on her sleeping habits, how she survives sleep deprivation and how to look like a million bucks when you feel like death warmed up. Thanks, Pops!

Carlie Fowler: For years now, we seem to have run similar paths: raising two young kids, running our own businesses, supported by wonderful men who also happen to be beautiful fathers. In light of that, what has your own journey with sleep been like?

Zoe Foster Blake: I used to think I was tired, pre-kids, but I wasn’t. Not really. But it’s not just their nightly call outs and wake-ups, or my daughter’s sparrow-like rising time, though that shit obviously contributes, it’s the motley brew all parents trudge through, a combination of general parenting exhaustion, work stress, the mental load of running a household, maintaining a social life, and trying to salvage a bit of grown-up time with your husband/wife/partner/self at night.

CF: I hear you, and I’m with you. The sleep deprivation in the newborn stages is so very intense. How do you cope on those days you don’t sleep so well?

ZFB: It’s amazing the shit you can accomplish on no sleep, and once you know you can do it, you just suck it up, have another coffee, and keep moving. But it is not sustainable. I am generally okay for two days, but if I have three nights’ shit sleep in a row, I’m teary, I’m an asshole, and my mental health dives. Small things become monumental, I’m oversensitive, and I make bad choices.

As for what I literally do to cope, I’ve stopped fighting it all day in a sluggish, irritable haze. I make a nap or meditation happen. One kid is asleep; one kid is watching TV. It’s 20-30 minutes, and then I’m civilised and productive again.

CF: What is are your go-to’s when you’ve been up all night with a baby?

Clothes: Jeans and a cheery, colourful t-shirt or jumper, or an easy dress. There are NO gloomy colours allowed on tired days. If I look carnival-esque, I might start to feel it.

Food: Long macchiato and a croissant.

Activities: Fresh air. The park. Bitch on the phone to other mums. Salt. Sugar.

CF: Tell us about your sleep routine? Are there any rituals or rules around bedtime?

ZFB: We’re routine through and through. We’ve been putting the kids on the “7pm bus” since they were about 8 weeks old. I rigorously time day naps, and I don’t mess with their routine unless we’re flying or Beyoncé drops in and wants a cuddle. I’m militant cos we need it as much as they do: I thrive on routine and structure – in a weird way it’s what enables me to be creative. The routine is definitely to the detriment of our social outing and fun levels, but we’re in thick of it right now, with a 15-month-old and 4-year-old. It’s temporary.

CF: How bad did it really get in the newborn phases?

ZFB: I spent my entire first pregnancy worrying about birth; I knew nothing about newborns. My husband had to go overseas for 2 weeks when our son was 3 weeks old and I was solo in a new city with no clue and sleep deprived. Despite my insistence that I didn’t need any help (I really, really did) my husband hired a night nurse to come in a few times, who also happened to be a pediatric sleep nurse and “baby whisperer” wizard. (Amanda McGill, Nest Nannies, 10/10 recommend.) Amanda gave us a routine to work with, settling techniques, and a sense of confidence in a very new and scary world. I suppose that’s traditionally a role played by sisters and mums, and mine definitely tried, but they were in another state, not huddled around the campfire with me taking turns to settle the baby. We got Amanda back when Sonny was 9-weeks-old and she got him sleeping from 7pm-6am. She did the same with Rudy, and it’s the gift that keeps giving. Because sleep. Is. Everything. For all family members.

CF: I hear you. We have similar rituals with our girls, but there’s also this: no matter how much you convince yourself (and others) that you’re able to keep pace with your pre-baby self, balance is total bullshit when you’re a new mum running a business. What are your thoughts?

ZFB: Complete bullshit. All you can do is do what you’re doing at that moment as best you can, and hope for a B-. I find the idea of having it all, or more accurately, doing it all, to be damaging and destructive. If having two young children, a rapidly growing business, and writing books all at once has taught me anything, it’s that I would never recommend it to anyone. I wish I could slow down, and be present, and idle, and enjoy this beautiful, big, busy time of my life, but I habitually get excited about new projects and new adventures and doing and making more stuff.

CF: How important is seeing sleep as a form of genuine self-care rather than just collapsing at the end of the day?

ZFB: It is my only form of true self-care. Anything else is a bonus. Sleep has the single biggest effect on my mood, mental health, work, personality, and clarity, and the amount of love, energy and creativity I can offer.

CF: What’s the best way to respond to someone saying you look really tired as a mum?

ZFB: A cheery ‘go fuck yourself’ should do it.

CF: Let’s talk about baby brain, is it 100% real or do you think it’s just the inevitable result of sleep deprivation?

ZFB: Great question, and I reckon there are some researchers out there who can answer far better than me. For what it’s worth, I think it’s probably a mix of both. I definitely had it. I felt really dopey. I couldn’t remember words, or names, or tasks. It was deeply frustrating. Like I’d been drugged.

CF: Do you have a cureall coping mechanism?

ZFB: How you cope is just to cope. To put one foot in front of the other. With my first kid, I ate shitty food for six months and became really insular. Second time around, I had more friends, I asked for advice, I paid for help, and I looked after myself.

CF: Do you have any tips you can share when you’re just plain tired and you have to keep on with productivity/creativity?

ZFB: Eventually, after so much coffee, you have to surrender. The body knows what it needs. If I can’t nap, I will meditate for 20 minutes. If I can’t do either because I’m under pressure from a room full of people, I go outside for a lap of the block and listen to Robyn loudly on my headphones.

CF: You travel a lot, how do you manage sleep routines with your two babes while overseas?

ZFB: We just did three months overseas with 10 different accommodations and four time zones, and the kids’ sleep routine was the first thing we sorted wherever we were. We’d arrive, and resume the nap/sleep time as per the normal at-home routine, whether that meant stretching them, or putting them down when they weren’t that tired. We put gaffa tape over blinds to black out the room, we put the white noise on, and we set up their teddies and sleep sacks before anything else.

ZFB: Absolutely! I know there are much more laid-back ways to travel, and there were many times I was jetlagged with an overtired screaming child in a hotel lobby begging for an early check-in, but we stand by it. It gives a sense of normality at an already pretty strange and overwhelming time for the kids, and it means we can have dinner and a (strong) drink in peace and quiet after a monster day. That bit is just as important.